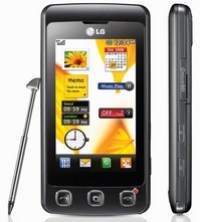 The LG KP500 is getting described everywhere as “affordable”, which is one of the best examples that I’ve ever heard of damning with faint praise. A few more details have been issued about the handset, the most interesting of which is that it’s now called “Cookie”, which seems a bit like calling a phone “Schnookums” or “Bunnikins”.

The “Sweetiepie” has no 3G or GPS, but it does have a 3″ touchscreen display, 3-megapixel camera, accelerometer, Bluetooth and an FM radio. The “Babycakes” will record video, but only at 12fps at 320×240 resolution – not great. It won’t play back anything more than 240×400 and 24fps either.

So what does it do? Well, most notably, it only costs €170 (£130 or so). That means that you should be able to get the “Sugarplum” for free on a relatively cheap contract, or even for not very much on Pay as you Go. Like I said, affordable.