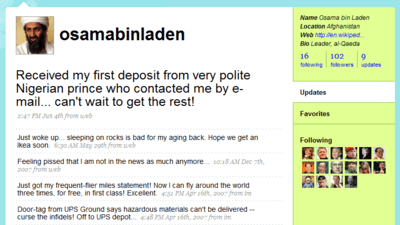 A draft Army intelligence report reckons that terrorists might be able to use popular microblogging service Twitter to co-ordinate attacks against the United States. It follows fears that World of Warcraft might be used for the same purposes both stories beg the question: haven’t the US army got anything better to do?

The report also fingers digital maps, GPS locators, and photo sharing apps as potential tools for terrorists, GPS utilities could be used for “marksmanship, border crossings, and in concealment of supplies.” There are benefits of “using a mobile phone camera to monitor the enemy and its mechanisms.” Twitter could be employed so that “the activists would Tweet each other and their Twitter pages to add information on what was happening with Law Enforcement near real time.”

A veteran intelligence analyst at the Federation of the American Scientists, Steven Aftergood, when interviewed by Wired on the importance of the report, said “If we have time to worry about ‘Twitter threats’ then we’re in good shape. I mean, it’s important to keep some sense of proportion.”

I completely agree – but if there isn’t anything useful for the report’s compilers to do in the Army, then instead of getting them to write about Twitter and WoW, how about they go and work somewhere else?