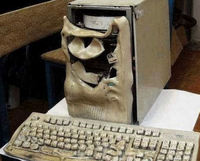 Poor old Sony is infuriating laptop makers the world over once again, today issuing a recall of over 100,000 batteries it has supplied to numerous portable computer makers.

The recall involves batteries manufactured by Sony in 2004 and 2005, which were supplied to the likes of HP, Toshiba, Acer, Dell and Lenovo. Sony says there have been around 40 overheating incidents involving the batteries, and, like poor workmen the world over, it has blamed the quality of raw materials and factory errors for the problems, rather than just admitting it’s rubbish at making batteries.

It’s fantastic news for us consumers, though – a recall programme like this is a great way to get a new laptop battery for free every couple of years, as Sony has already confirmed that affected users will be able to apply for a complimentary replacement.