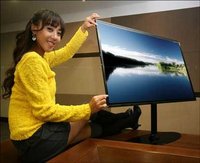 The OLED tech war is raging in the laboratories of companies across the planet right now, and here’s what Samsung’s boffins have managed to come up with – a 40″ OLED TV.

Massively superior to its past OLED test developments, this latest model features a stunning contrast ratio of 1,000,000:1 – and manages to pull off the full HD spec 1920×1080 resolution, or 1080p to give it its common name. It’s pretty much a finished OLED telly, although Samsung has not revealed any launch date plans.

The OLED war has been raging for many years. Sony won the first battle, managing to start selling a tiny 11″ model in Japan at the end of 2007. Samsung’s shown off its 40″ OLED before – but that only had a contrast ratio of 5000:1 and much lower resolution.

If you’ve just bought a new HD TV, you have our commiserations.