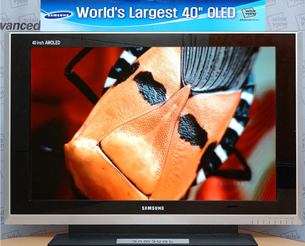 Samsung showed off a 40″ OLED TV at CES in January, however it’s taken until now for them to announce they’ll be available commercially as of 2009.

They’ve supposedly started producing the panels already – 1.5 million of them – however that number will reach 3 million in 2009, and 6 million in 2010. If they enter the market next year with OLED panels, they’ll be joining Sony who managed to pip everyone to the post with their XEL-1.

OLED screens are looking like the Next Big Thing in the world of consumer electronics, due to their wider viewing angles, faster response times, better contrast and colours, and of course – the fact that they’re so darned skinny!