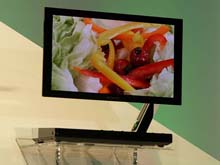 It features an 11 inch screen, and is just 3mm thin, thanks to the fact that the TV doesn’t require backlighting. The materials used are carbon-based and emit light when an electric current is applied.

OLED technology offers advantages over existing LCD screens, including wider viewing angle, better response time, contrast, and colours, and better energy efficiency. However, the materials do degrade over time, and the manufacturing process is currently difficult.

In fact, Sony had already prototyped a 27 inch OLED TV at this year’s Consumer Electronics Show. Toshiba have been aiming for production of OLED sets by 2009.

Manufacturers obviously believe in the future viability of OLED, though it will be a while before the technology replaces large screen LCD and plasma screens in your living room.

The high-end Sony XEL-1 will go on sale in Japan on 1st December with an equivalent price of £850.