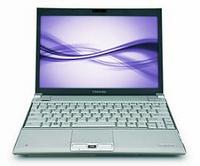 There’s an old trick in marketing for if you want your product to stand out: Give it a foreign sounding name. Häagen-Dazs did it, and even Matsui isn’t a real electronics manufacturer – its just Dixon’s own-brand that it tries to make sound Japanese. Hell, even terrorists do it. Al Qaeda sounds much more scary and mysterious than, say, “The IRA”.

Toshiba knows this too, and have come up with some new laptops for their Portégé range. By the name, you’d think they were some sort of exclusive laptops perhaps available only in a Parisian boutique – the sort of shop that has a wooden floor and practically nothing on display, yet inexplicably stays in business – though all indications point to the laptops being available at PC World.

All four of the laptops announced feature special shock absorbing technology in the screen, HDD and outer-shells, and interestingly, feature finger print readers for Jack Bauer-level security. He’d have to cut your fingers off to get in.

The Portégé R600 is Toshiba’s attempt at doing the “world’s thinnest and lightest” laptop, as it’s only 1.18″ thick and weighs 2.14Ibs – anyone care to dispute this claim? This laptop packs in a 12.1″ LED-backlit screen, 2GB of RAM, a 128GB SSD or 160GB HDD, an Intel Core Duo ultra-low voltage processor and assuming the international banking system is still going by the time you want to buy one, it will set you back $2,399.

For people wanting a serious business laptop, there’s also the “Tecra R10” laptop which will set you back $1,999 – which will buy you a computer with a 200GB HDD, 4GB of RAM and what Toshiba claim is the “most secure Toshiba laptop ever”. This is an interesting reversal from Toshiba’s old range of specifically insecure laptops – which had a custom sound package installed so that they would say things like “This DVD makes me look fat” and “Why does no-one like me?” and “Why am I so ugly?”.

Apparently the final two laptops in the announcement are pretty similar – there’s the Portégé M750 tablet and the A600 (pictured). Both contain stuff like you’d expect – a 200GB HDD, 5-in-1 card reader, DVD writer, built-in webcam, and a 12.1″ screen, but the difference is that the A600 is approved by the Green Electronics Council for the environmental credentials. This is a positive step… but then why did they deliberately manufacture a similar laptop that pollutes more?

(via Lucy at Shiny Shiny)