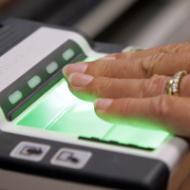 Orwell began spinning in his grave at an even faster rate today after it was announced by the government that the police are to be given mobile fingerprint scanners, which will allow them to scan prints at the scene and immediately compare them to the national “Ident1” database.

The argument in favour, of course, is that it saves a whole load of time – in the olden days when quaint notions of things like “checks and balances” were still practised, it’d apparently take on average 67 minutes to take someone back to the station to fingerprint them, whereas this new technology will allow the state to print and oppress protesters within a matter of seconds. This is apparently similar to having an extra 336 officers working.

The liberal Guardianista hippies shouldn’t worry too much though about their precious “civil liberties”, as apparently the new law requires that prints be deleted rather than uploaded to the database… So lets just hope that no one in the security services ever abuses their power!

(via The Press Association)