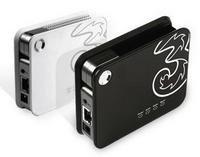 Mobile operator underdogs 3 has just launched an addition to its family of wireless dongles – a wireless router. It’s quite a smart idea – it allows you to plug a 3 wireless dongle in, and it’ll act like an access point, when there isn’t one normally available. Given usual 3G speeds, however, how fast this would actually run when split between “up to 4” people is open to debate.

It’ll work on the move, thanks to an included rechargable battery. 3 reckons it could even replace home broadband for some people. I’m a little skeptical of that, at least until 3G speeds improve, but I suppose if you’re just surfing the net and not doing much downloading, then it might work.

Of course, you can always just connect a dongle normally to your PC or Mac and use Internet Connection Sharing to make the Wi-Fi card act as an access point anyway. If you’re okay with fiddling with network settings, then I’d recommend that route over this product.

If you’re less keen on mucking about in the control panel, though, then you now have the option of letting 3 sort it out for you for £70. It’s available now in black and white.

UPDATE: Turns out there isn’t a battery in it after all. Mains-only.