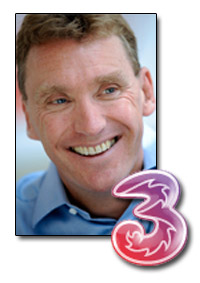 At a regulatory round table event this morning 3 CEO Kevin Russell, fumed at other UK mobile carriers, accusing them of “scaring consumers senseless” over roaming charges, and calling the current UK regulatory environment “farcical”, “a fundamental failure” and absurd”.

3, which has less than 10% of the market in the UK, has struggled over recent years to compete with the big boys – O2, Vodafone, Orange and T-Mobile. Kevin Russell, however, who joined the company in January last year, is tasked with changing the status quo. To say that he’s upset about the currently regulatory climate would be an understatement.

“New entrants supporting incumbent operators is wrong,” he says, matter-of-factly, over tea and croissants. He’s referring to “Mobile Termination Rates”, which are fees that network operators pay when someone on their network calls another network.

In the UK at the present time, these are about 6p per minute for voice calls, and 2-3p for SMS. However, Russell makes the point that the actual cost to networks to route a voice call is somewhere in the region of 0.5 – 1p, and a miniscule amount for texts – a few hundredths of a penny.

Due to the fact that new entrants into a market (like 3) will always have a net outgoing traffic (thanks to their lower market share), this means that entrants will be paying vast sums of money to the incumbents – £190 million to date in the case of 3.

It means that 3 can’t charge their customers less than the mobile termination rates, or they make a loss. 3’s prices are essentially dictated by the competition. Kevin Russell says this is “unfair, bad for competition, and needs to be addressed”.

British Telecom faces a similar issue. “BT customers calling mobile phones are overcharged by £1 billion each year”, says Russell. That’s £30 for every household. His ideal solution is to ask Ofcom to slash its cap on termination rates, all the way down to a penny.

He also suggests a “bill and keep” arrangement where networks enter into an agreement not to charge each other for call termination and instead recoup the costs from their customers. He acknowledges the former model is more realistic but Wikipedia (for what that’s worth) lauds the latter model as “a natural evolution path for the telecommunications industry to follow”.

The other networks claim that by lowering MTRs, the UK would be forced to charge consumers to receive calls (like in the USA), or would mean that some consumers on the lower end of the economic scale would be priced out of the market. 3, however, pledge that they’ll never charge people to receive calls and that they’ll match or better any existing pre-paid plans on any network.

Russell then went on to talk about moving your mobile number between networks – a task which currently takes 24 hours in the UK. Other countries, however, have cut this dramatically. In 1997, Hong Kong reduced it to two hours. Australia followed in 2001 and Ireland in 2005. These numbers have since been reduced further. In the UK, Russell claims, we won’t see this before 2010 at the earliest.

Russell then spoke about 2G spectrum refarming. That’s a very complicated term for taking old 2G capacity on networks which is no longer required, and upgrading it to 3G capacity. 3 have no 2G capacity, due to their relatively recent entry into the market, so they’ll have dramatically less capacity and lower speeds on their network if the other operators upgrade their 2G space.

Russell argues that spectrum which is no longer being used for its original purpose should be offered on an open market, rather than being allowed to be repurposed by whoever has the rights to it at that time. His argument rests on whether using spectrum space for 3G communications is drastically different to using it for 2G – he argues it is, but unsurprisingly, the other networks disagree.

Lastly, he spoke about roaming charges, really laying into the other mobile networks. He highlights one example: “5GB of data on a high street in the UK costs £15. On a high street in France, however, that data would cost £15,000!” This is where the gloves came off – he called this “absurd”, and said “the industry has completely and utterly lost touch”. He accused them of “scaring consumers senseless”.

At this point, someone asked if 3 would be willing to compromise over MTRs, perhaps reducing them to 3-4 pence, rather than all the way to a penny. Russell, already riled up from roaming charges, cried “Bollocks to compromising!” and explained how he felt strongly that new entrants subsidising incumbents is wrong. He said “It’s wrong to compromise on something affecting consumers”.

The crucial question was then asked – can 3 survive without regulatory changes? For a company who’ve been struggling to compete, this was evidently a question that Russell had grappled with at length himself. His reply was slow: “Probably. Maybe. Not if the issue of spectrum refarming isn’t addressed.”

Although 3 have been making great leaps in mobile broadband (Russell describes it as their “saviour”) they’re going to be increasingly reliant on wireless dongles in the future if regulatory reform doesn’t arrive. They’re currently working on doubling the size of their cell tower network. That will help them considerably with capacity and speeds, but if they can’t cut prices, they can’t get market share, and 3 will die.

Still, with 22 million laptops in the UK, and broadband becoming more prevalent, as well as netbooks starting to arrive with 3G chips inbuilt, the potential market for those wireless dongles is massive. Already, IM traffic on the 3 network is a third of the size of their SMS traffic.

3 are brilliantly placed to capitalise on that trend, and if they can successfully become the provider of choice for mobile broadband, either on the laptop in dongle form, or on the mobile phone, then they’ll make it. Just.