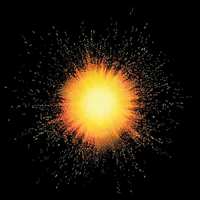 The end of the world is nigh! Tomorrow morning, before many of us will have had our first cups of tea, the Large Hadron Collider will be switched on at CERN. By the time we reach for the sugar, we may no longer exist; nor the sugar, nor any record of sugar ever having existed, nor records. Of course, that’s extremely unlikely.

If you’re not up to speed on this whole story, then I should probably explain that CERN is the European Organization for Nuclear Research, based on the border of France and Switzerland, where they’ve dug a 78km-long tunnel in a large ring and created the world’s largest particle accelerator, but you know this, right?

The idea is to hurtle protons and neutrons around the ring in tiny particle beams, guided around by magnets at speeds of around 11,000 28km revolutions every second. That’s, um, that’s pretty quick.

When the beams are lined up, the particles will collide and split open, fingers crossed, revealing all sorts of smaller sub-atomic particles including one or two which have only been theorised before such as the Higgs Boson – a particle responsible for allowing the concept of mass; rather important.

The conditions that they’re trying to create over at CERN is essentially what was about immediately after the Big Bang and, of course, one of the concerns about having a re-run of the Big Bang is that it could end everything as we know it, which might be a problem.

Most of the anti-LHC lobby seems to be focusing on the idea that it could create microscopic black holes which could suck all matter into them but many, including the Hawkins, have rubbished that one by saying that these anomalies would just evaporate away again.

The name of the process is rather anarchic. A big bang doesn’t sound like the kind of thing you’d have much of a say in once it started and if it decided to reboot the Universe, then that’s exactly what it would do. But don’t worry, they’ve got some magnets to stop it.

Of course, this could be exactly how the Universe began in the first place. Some species or other got all advanced and too big for its boots, wanted to know how it all works and ending up breaking it in the process. Rather like the last time I tried to fix my PC.

But, if that’s the way it’s going to go down, then I think it’s as good a way as any. Better we all die at the same time in pursuit of something noble than all alone in some terrible post-nuclear apocalypse after trying to destroy each in quest to own all the Earth’s oil, water, air or last remaining scraps of pornography.

As it goes, the results of the LHC will probably be largely mundane to those not in the know and only eye-brow flexing for those with multiple physics degrees. I’m being pessimistic here because I’m hoping for something mind-blowing (notice I didn’t say ‘earth-shattering’). The tough part is that we probably won’t be any the wiser tomorrow. All they’re going to do is switch it on. The first high energy collisions won’t be happening until 21st October.

But until then, spare a thought for the Universe and realise that, even if you’re of the nervous persuasion, what’s happening in the next month is one of the most noble and exciting projects that (wo)mankind has ever embarked upon and if that cup of tea really is your last, then I promise I’ll say hello on the other side. I’ll be standing next to that large group of men in white coats looking rather sheepish.