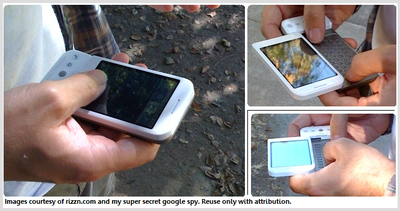 There’s a rumour floating around the interweb that Amazon’s MP3 store will be available on Google’s forthcoming mobile phone, which there’ll be an announcement on later today. If it’s true, it would be a powerful boot in the face to Apple, Nokia and Sony Ericsson, all of whom have either launched, or are preparing, mobile music stores.

The rumour originated when a Google or T-Mobile employee in San Francisco’s bay area was showing off the phone unofficially in a bar. One eagle-eyed member of the audience noticed that it was packing an Amazon music and video store application. The “video” bit is particularly interesting. iTunes doesn’t currently let you buy or view video files from the iPhone. Such a feature would be very useful in eating into the iPhone’s market share.

Amazon’s MP3 store should be launching in the UK very soon, so once the gPhone arrives on these stores, it’s likely we’ll get access to the functionality too. Amazon declined to comment on the rumours, but perhaps they’ll say something after the official launch of the device at 3.30pm today. We’ll be liveblogging that, so stay tuned.