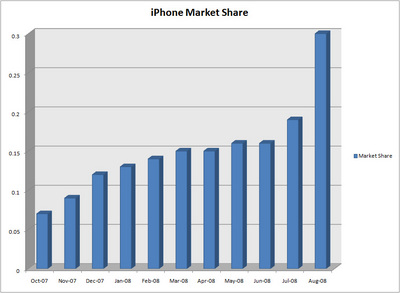 There’s no disputing that iPhone 3G’s been popular. Figures just released by Net Applications – a web service company – indicate that usage of the web functions of the device has more than doubled since the 3G model was released.

Whether Android or Symbian might disrupt this in the future remains to be seen, but so far, Apple certainly have the most compelling mobile internet experience, and they’re gaining a nice head start in terms of market share too. It’ll be interesting to see what happens when Android is released.

Related posts: iPhone 3G on PAYG | Gaming on the iPhone