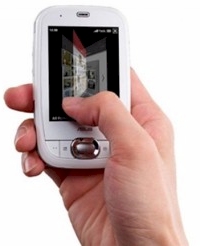 Another day, another Asus product announcement – but here’s a surprise: The smart phone it has announced isn’t branded as part of the Eee range, despite there being scope for calling it the Eee-T as you can use it to “phone home”.

The Asus P552w looks pretty nice though – it’s an entirely touch screen device, as seems to be the trend these days and apparently boasts a new navigation system called “Glide” – which looking at the screenshot on the photo, it looks to me that it may act a bit like iPod coverflow.

It’s still a Windows device at heart though, running Windows Mobile 6.1 Professional. It runs on a 624Mhz processor with 128MB of RAM, and there’s 256MB of flash memory built in.

Support-wise, it seems to tick all the boxes. Aside from your regular phone functions you get on-board 802.11b and g wif, GPS with Google Maps, Bluetooth 2.0 with EDR, push e-mail support, a (slightly lacklustre) 2 megapixel camera that can also record video, and it’s expandable with MicroSD cards. Being a Microsoft device you can also view Powerpoint presentations, and view and edit Word and Excel documents. There’s even MSN messenger built in.

Apparently to set the phone apart from the standard Windows Mobile setup the phone will come with software to manage audio and photos, as well as an RSS reader and software to view Flickr photos and YouTube videos. It’ll also be available in black if you’re so inclined.

As a moderately interesting aside, its notable that they’ve called the device the P552w – assuming the “W” stands for Windows, does that imply that they may release a version of the phone running, say, Symbian, Palm OS (is that even still going?), or maybe some sort of mobile Linux distribution which at the moment mostly exists only in my head?