LaCie is launching the last RAID storage solution you’ll ever need until someone invents the next ports in advance of eSATA, Firewire 400/800 and USB 2.0, which, come to think of it, could be until this time next week. Unlikely though.

The aptly named LaCie 4big Quadra provides data back-up, storage and security for up to 6TB of information through four distinct, hot-swappable bays. The drives can be a read at maximum burst transfer speeds of 200-230MB/s through eSATA 3Gbits.

The machine is aimed at people working with HD video or RAW file photography footage or any kind of high data stream usage professionals and amateur enthusiasts. Rather than large corporations, we’re looking at those working from home or consumers with either a lot of media needs or a seriously large amount of frequently used data.

This is probably one reason why the 4big Quadra looks pretty. It does, don’t you think? At first glance, it’s rather like a futuristic washing machine but when stacked together you get the idea of how a classically unattractive item could fit in very nicely with your G5 iMac and painted white bookcases. 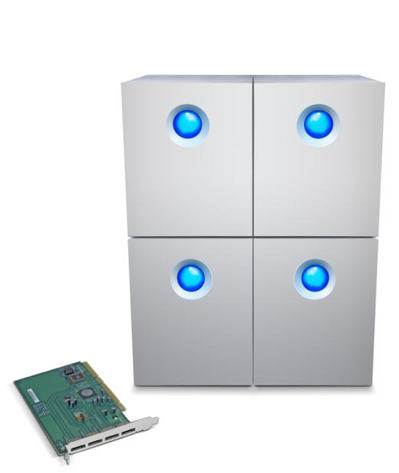 You can stack and chain up to four of them together for a total of 24TB, accessible at a transfer rates of 600MB/s, which is none too shabby at all, and it’s all compatible with both PCs and Macs.

It supports all RAID modes including the striping in RAID 0 and RAID 1 but, best of all in this eco-age, it uses 80% less power than the average model and as a consequence runs with a new cooling system that’s apparently 50% quieter. Short of getting an acoustics engineer out, I’ll take their word on that one.

The LaCie 4big Quadra hits the shelves in October at the not-cheap price of £659.00 for the 2TB version but then you didn’t exactly expect this to cost pennies, did you?