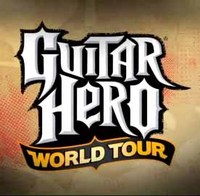 In the 21st century, owning one plastic guitar to play videogames with is an acceptable thing for a person to do. Owning two though? That’s when the neighbours start whispering about you being a bit weird and having delusions of grandeur about being the next Tom Morello.

There is some good news though if you do think that you’re the next Tom Morello: Microsoft has followed Sony’s lead and has announced that the instruments in the next generation of rhythm games – Guitar Hero World Tour, Rock Band 2 and Konami’s Rock Revolution – are all going to be cross compatible with each other.

Clearly both Microsoft and Sony have realised that people who buy Guitar Hero are quite likely to want to play Rock Band too (and vice-versa) – and are more likely to buy the other if it doesn’t cost a couple of hundred pounds only to duplicate the instrument setup you already have.

I hope that for Guitar Hero 5 and Rock Band 3 they try and one-up each other by introducing new instruments and obliging the other side to support it: Trumpet Hero and Brass Band, anyone?