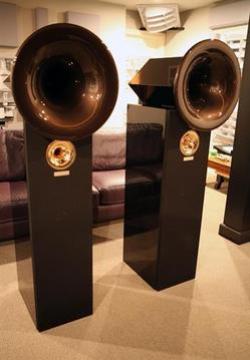 (It sure as hell isn’t in the eye)

German audio company Acapella Audio Arts is a household name amongst serious audiophiles and renowned for its dangerously high quality audio products, and in particular its Violon loudspeakers. Well, audiophiles, prepare to clasp the nearest ring binder to your waists and shuffle cautiously towards the gents; Acapella has just unveiled its latest Violon set – the Violon & High Violon MKIV.

Sporting the same external design as its predecessor, the MKIV features a patented ion plasma tweeter, a new updated crossover, internal cabinet modifications and advanced tuning techniques. The woofers have been overhauled and made larger. The large horns on the front have also been finished in Porsche Macadamia Metallic, giving this version of the speaker something much more reminiscent of a classic gramophone.

Acapella Audio Arts reckons the MKIV takes the Violon speakers to a “new level of refinement”, and visually I don’t think anyone is going to have trouble remembering them when they spot them in your gaff either. No idea how much they will cost – I suspect a safe bet would be to pick a number between one and ten and stick four noughts on the end. It is rumoured that if you plug an iPod into them, they will self-destruct in sheer disgust.