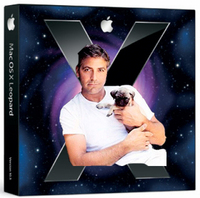 After Apple confirmed the release of their new operating system, OS X Snow Leopard, on Monday, it occurred to us at TD that pretty soon Steve Jobs is going to run out of big cats to name his products after.

He’s gone through Cheetah, Puma, Jaguar, Panther, Tiger and Leopard already and, with only Lion left, he’s going to have to move on to some different animals and eventually some other ideas altogether. So, knowing the Apple Master like we do, this is the Tech Digest Top 10 of what Apple will call their operating system next:

4.) OS XXY Hermaphrodite – the one that costs twice as much with no improvements at all – go fuck yourself

10.) OS X Steve Jobs – We were going to say OS X God as the pinnacle but, lets face it, the man’s not exactly steeped in modesty