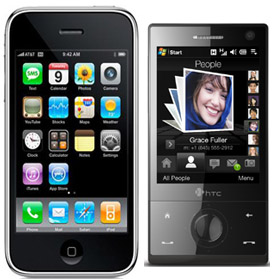 Both handsets tout their touchscreens as being their biggest asset, however how do they compare in a fight? Call it a touch-off, if you will. On your marks…get set…go!

Operating System
HTC Touch Diamond: Windows Mobile 6.1 Professional, the first HTC phone to do so. However similar it may be to WM 6.0, HTC has actually layered their own software on over the phone, giving it a more user-friendly navigational system, and TouchFLO 3D technology, which we first saw in the Touch last year.
iPhone 3G: The iPhone runs on OS X, which is Apple’s very own operating system.

Storage Capacity
HTC Touch Diamond: 4GB of internal flash storage, plus a microSD card slot is supported, for additional storage.
iPhone 3G: 8GB and 16GB, with the latter available in both black and white.

Camera
HTC Touch Diamond: 3.2-megapixel sensor, and auto focus. The internal accelerometer means the Diamond acts like the iPhone, so photos can be viewed in landscape-stylee and be browsed through with a flick of the finger. The Diamond also has a second camera on the front, a VGA CMOS colour camera, for video-calling.
iPhone 3G: 2.0-megapixel camera, with geo-tagging and third-party application integration. 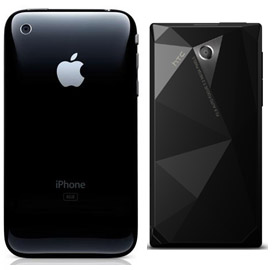 Battery Life
HTC Touch Diamond: 270 minutes’ talktime for WCDMA and up to 330 minutes on GSM networks, whereas standby is 396 hours and 285 hours respectively. When video-calling, users will get up to 145 minutes on WCDMA.
iPhone 3G: Up to five hours of talk time using 3G, or 10 hours using 2G, standby is 300 hours, five hours of 3G internet use and six hours of Wi-Fi internet use, seven hours of video playback and up to 24 hours of audio playback.