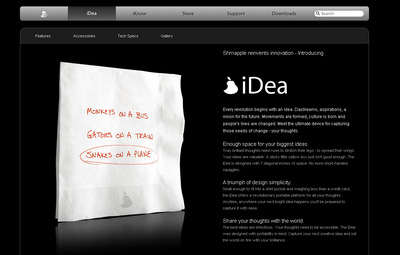 With a week to go until WWDC, a new Apple product rumoured to be announced has surfaced that is set to change the world of tech as we know it. The iDea is an entirely new paradigm in concept design and implementation, staggering for the fact that until now it has completely passed under the radar.

Measuring 7-inches diagonally, the lightweight, portable, 3-ply “creation surface” provides a space far superior to that of a post-it note on which the magic can happen. The iDea can be carried about in the pocket and its content shared wirelessly with anyone across your social networks.

Input devices are not supplied but the InkSync series of pencils and biros is available at an extra, and likely very large, cost. The iDea comes in Arctic, Zen, Snow and White but doesn’t appear to be waterproof.

First they gave us the Jesus Phone, now, at last, is the God Delusion.