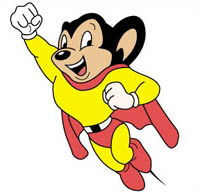 Well, here’s a turn up for the books – someone else is suing Apple and thus the shoe moves from one foot to the other. I doubt it’s the first time but, with a history of threats against all manner of smaller developers and even the city of New York, it’s rather pleasing to see that Jobs Inc. is in the shtook even if it’s only a small amount.

The legal issue in question comes over the Apple Mighty Mouse. They did their homework relatively carefully by licensing the name from the owners of the cartoon character CBS, but they didn’t count on a small Maryland-based accessory maker who’d manufactured a silicon-sealed, gunk-proof mouse a year earlier.

Man and Machine, who make the original Mighty Mouse, is arguing that the licence from CBS doesn’t cover electronic goods and it looks to me as if Apple has few legs to stand on, in which case they’ll probably pull the old bury ’em in paperwork routine before settling on a pay off large enough to keep Man and Machine very happy and very quiet.