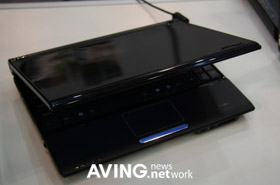 Hivision is a brand we’re unlikely to ever see in the Western World, however it’s worth showing to you, due to the claim that it’s an ‘eco-friendly’ sub-notebook.

Hivision is claiming the battery will last for three hours at a time, and that it weighs 1400g with said battery. A 3-in-1 card inbuilt card reader has been thrown in also. If the NB1020 was ever released into the wild over here, it would be a firm rival to the new Eee 1000 just announced by ASUS.

I just can’t get over Hivision’s claim that it will run Vista. Hands up who’d love to see that!