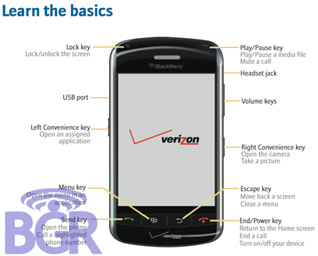 The first official picture of the touch-screen BlackBerry Thunder has appeared online, and it’s rather interesting to note that it’s not unlike the design Boy Genius Report mocked-up a month ago. It’s almost as if they knew…

The picture above from BGR helpfully shows what each button will control on RIM’s first touch-screen device, and that it’ll be available on the Verizon network in the US.

Looks like there’ll have to be a tough decision made between the Thunder and Bold handsets at some point.