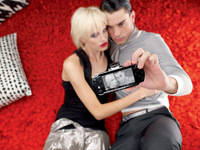 While Sony might be messing things up a little elsewhere in its gaming portfolio, it’s charming PSP goes from strength to strength with each software update – and the changes coming in version 4.00 are every bit as innovative as we’ve come to expect from the portable media-playing power machine.

Well, fairly innovative. A bit innovative – there’ll be a little Google search bar on the front end of the machine’s XMB dashboard menu screen thing when you update to firmware v4.00, allowing wi-fi-connected PSPs to immediately find their user the material of their choosing within seconds.

The version 4.00 PSP firmware is coming “soon” according to the Official PlayStation blog, plus it’ll also allow you to watch movie rips on your memory stick in slow motion or double-speed. Not a particularly useful addition, but that’s due to PSP already doing pretty much everything.