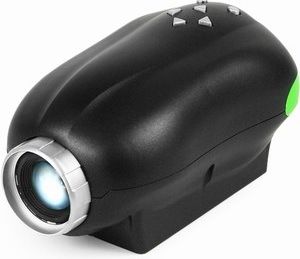 On Friday, Drinkstuff will begin selling its Micro SD Card Projector, touted as an incredibly simple way to watch video footage from a memory card or a connected games console or DVD player.

The trouble is, the £99.99 price tag is just way too high for a projector with such basic specifications.

Let’s face facts — most people are moving towards digital, so while a projector with RCA composite leads (you know, the red, white, and yellow phono plugs) may be simple, it’s hardly future proof.

It pumps out a disappointing 480 x 240 pixel picture, which is barely enough to view YouTube videos in full resolution (should you have a way of actually getting them onto the SD card in the first place), and isn’t even a standard projection ratio (2:1 as opposed to the three most often used: 4:3, 16:9, or 16:10)

Its “high efficiency LED light” can project an image up to 30 inches diagonal — just as well it is efficient as this projector runs from four AA batteries. Apparently, a power cable is just far too messy and problematic to deal with.

The projector has a built-in speaker with volume control — I’m not even going there.

To be fair, I haven’t seen the projector in action, but when you can get a basic high definition gaming DLP projector from InFocus for around £160, with 1,500:1 contrast ratio and component inputs, the Micro SD Card Projector’s price doesn’t make sense, particularly when you factor in the cost of batteries.

Had this been under half the price, it might have made an interesting gadget for those not too fussed about a high quality image, but when you can get so many more features for not much more cash, the Micro SD Card Projector doesn’t look like a good deal at all. Buyer beware.