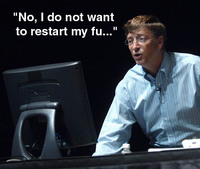 This fantastic email comes from the archives of Microsoft, and was originally turned over to the authorities during the nasty anti-trust investigation.

In it, Bill releases his epic frustration at the process of trying to download Windows Movie Maker. It’s nice to know that Bill counts the seconds Microsoft web pages take to load and also reboots his PC “every night.” Here are a few quotes – the full email’s after the jump.

BILL GATES: “The first 5 times I used the site it timed out while trying to bring up the download page. Then after an 8 second delay I got it to come up.”

BILL GATES: “Then it wanted to do an install. This took 6 minutes and the machine was so slow I couldn’t use it for anything else during this time. What the heck is going on during those 6 minutes? That is crazy.”

BILL GATES: “Then it told me to reboot my machine. Why should I do that? I reboot every night — why should I reboot at that time? So I did the reboot because it INSISTED on it. Of course that meant completely getting rid of all my Outlook state.”

I am quite disappointed at how Windows Usability has been going backwards and the program management groups don’t drive usability issues.

Let me give you my experience from yesterday.

I decided to download (Moviemaker) and buy the Digital Plus pack … so I went to Microsoft.com. They have a download place so I went there.

The first 5 times I used the site it timed out while trying to bring up the download page. Then after an 8 second delay I got it to come up.

This site is so slow it is unusable.

They are not filtered by the system … and so many of the things are strange.

So I gave up and sent mail to Amir saying – where is this Moviemaker download? Does it exist?

So they told me that using the download page to download something was not something they anticipated.

They told me to go to the main page search button and type movie maker (not moviemaker!).

I tried that. The site was pathetically slow but after 6 seconds of waiting up it came.

I thought for sure now I would see a button to just go do the download.

In fact it is more like a puzzle that you get to solve. It told me to go to Windows Update and do a bunch of incantations.

This struck me as completely odd. Why should I have to go somewhere else and do a scan to download moviemaker?

So I went to Windows update. Windows Update decides I need to download a bunch of controls. (Not) just once but multiple times where I get to see weird dialog boxes.

Doesn’t Windows update know some key to talk to Windows?

Then I did the scan. This took quite some time and I was told it was critical for me to download 17megs of stuff.

This is after I was told we were doing delta patches to things but instead just to get 6 things that are labeled in the SCARIEST possible way I had to download 17meg.

So I did the download. That part was fast. Then it wanted to do an install. This took 6 minutes and the machine was so slow I couldn’t use it for anything else during this time.

What the heck is going on during those 6 minutes? That is crazy. This is after the download was finished.

Then it told me to reboot my machine. Why should I do that? I reboot every night — why should I reboot at that time?

So I did the reboot because it INSISTED on it. Of course that meant completely getting rid of all my Outlook state.

So I got back up and running and went to Windows Updale again. I forgot why I was in Windows Update at all since all I wanted was to get Moviemaker.

So I went back to Microsoft.com and looked at the instructions. I have to click on a folder called WindowsXP. Why should I do that? Windows Update knows I am on Windows XP.

What does it mean to have to click on that folder? So I get a bunch of confusing stuff but sure enough one of them is Moviemaker.

So I do the download. The download is fast but the Install takes many minutes. Amazing how slow this thing is.

At some point I get told I need to go get Windows Media Series 9 to download.

So I decide I will go do that. This time I get dialogs saying things like “Open” or “Save”. No guidance in the instructions which to do. I have no clue which to do.

The download is fast and the install takes 7 minutes for this thing.

So now I think I am going to have Moviemaker. I go to my add/remove programs place to make sure it is there.

It is not there.

Someone decided to trash the one part of Windows that was usable? The file system is no longer usable. The registry is not usable. This program listing was one sane place but now it is all crapped up.

What an absolute mess.

Moviemaker is just not there at all.

So I give up on Moviemaker and decide to download the Digital Plus Package.

I get told I need to go enter a bunch of information about myself.

I enter it all in and because it decides I have mistyped something I have to try again. Of course it has cleared out most of what I typed.

I try (typing) the right stuff in 5 times and it just keeps clearing things out for me to type them in again.

So after more than an hour of craziness and making my programs list garbage and being scared and seeing that Microsoft.com is a terrible website I haven’t run Moviemaker and I haven’t got the plus package.

The lack of attention to usability represented by these experiences blows my mind. I thought we had reached a low with Windows Network places or the messages I get when I try to use 802.11. (don’t you just love that root certificate message?)

When I really get to use the stuff I am sure I will have more feedback.

Related posts: Bill on Windows 7 | Bill dancing for YOU