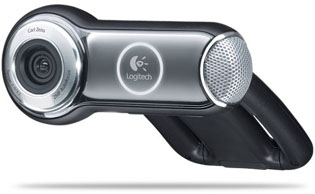 Are you a frustrated Mac user who’s just dying to use a Logitech webcam with your slinky white machine? Yes, I thought Macs came with integrated webcams too, but it’s a nice gesture from Logitech, who up until now hasn’t actually supported Apple’s operating system.

The QuickCam Vision Pro has a 2.0-megapixel sensor with Carl Zeiss lens, and is compatible with both iChat and Skype. Video can be recorded at 30fps, sadly at VGA-quality I’m afraid. Apparently it’ll be dropping into stores in July, at £69.99 here in the UK, or $130 in the US.