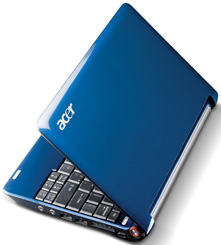 Acer officially announced what we all suspected, that they had been readying a sub-notebook to compete with the Eee PC. The Aspire One, pictured, is an Intel Atom-based lappy with an 8.9-inch CrystalBrite LED backlit screen.

It’s not just a choice of 512MB or 1GB of RAM you have either, as Acer is kindly offering models with either Linpus Linux Lite or Windows XP, with the first OS packing 8GB of SSD and Windows giving the user 80GB of HDD space. Some things are best left to Acer to decide on however, so each model has a 0.3-megapixel CrystalEye webcam, 5-in1 card reader, Wi-Fi plus the option of integrated WiMAX or HSDPA connectivity.

Out on the 10th of July, the Linux model will start at £199 in the UK, with the Windows XP bad boy beginning at £299. Both models will initially be available in blue and white colour options, with pink and brown shades added later.