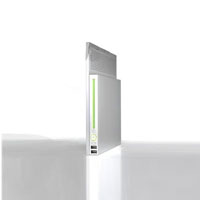 Microsoft look like they’ll be releasing a mid-cycle refresh of the Xbox 360 in the form of a more slimline model to sit amongst the boxes amassing underneath your TV.

This new incarnation will be possible on the back of the release of the Valhalla chip which combines both the computer and graphics processors and allows for the the innards of this new Xbox 2.5, or Xbox 580, to be that much smaller.

The shrunk-in-the-wash look obviously did wonders for the PS2 and is an excellent trick for not only boosting sales but also test driving the technology behind the true next generation Xbox console.

Expect to be reorganising you equipment in 2009.