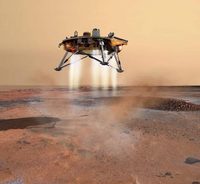 It’s of little surprise that the ordinarily starch-collared NASA scientist were whooping with delight yesterday as the Phoenix craft landed safely on Mars.

The probe – still sounds rude – left the Earth nine and a half months ago and I can imagine it would be a bit of bitch to have to wait the best part of a year again if it had ended as space scrap on the surface along with the last 6 out of 11 crafts that have attempted landings on the Red Planet.

The tricky part is that because it takes seven minutes to make it through the atmosphere of the fourth rock from the sun but 15 minutes for radio waves to reach Earth, it simply isn’t possible to land anything remotely. Instead the brave little bot is fitted with aeroshell breaking to slow it down, a heat shield to cool the results of friction and a parachute to see it down safe. Luckily for all, this time it worked.

The next step was for power and that was supplied when its solar fan properly unfolded and all of the good news was then radioed back to Earth via the successfully extended probe aerial.

Phoenix landed in the ice-frozen polar regions of the planet and its mission is to search for signs of life within the permafrost or at least signs of signs of life – the nutrients and minerals that would be necessary to sustain living organisms.

This is all relies on the final test for the lonely, little craft and its 7.7-foot robot arm which will be used to dig into the soil and take samples and that should be happening any time now. Fingers crossed.