More news from the world of mad scientists PLAYING GOD – this time they’ve managed to thoroughly confuse a poor monkey by hooking its brain up to robotic arm.

The serious research angle behind the monkey/robot/brain fun is something to do with it eventually being used to help humans control prosthetic limbs. So far, the boffins at the University of Pittsburgh School of Medicine have managed to teach a monkey to pick up a marshmallow and put it in its mouth. Here is the dramatic moment in pictures: 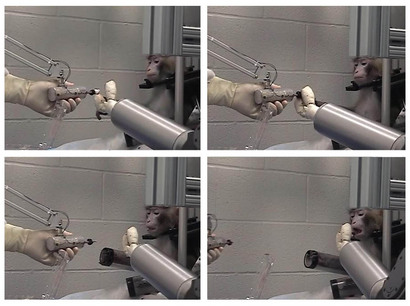 This development in marshmallow consumption alone could help speed up the rate at which humans are becoming morbidly obese. Well done, scientists. Grant money well spent. Maybe next year you can spend a few million dollars getting a dog to use a robot arm to give itself a meaty treat?