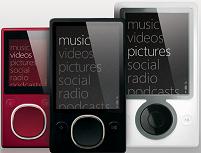 As Bill Gates promised back in January, the Zune is landing in Canada!

Officially landing on Friday the 13th (of June), the 80GB version will be CA$249, the 4GB CA$139, and 8GB CA$189. Microsoft hasn’t mentioned the original 30GB Zune, which still remains on sale in the US, so my guess is as they’re not rolling out the model in new territories, they’ll probably soon discontinue it in the States as well.