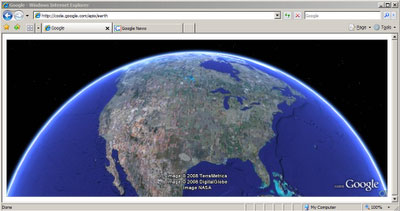 Google has just announced the release of the Google Earth API and browser plug-in. Essentially it’s offering the same functionality as Google Maps, but with the added excitement of being 3D. It hasn’t exactly led to a huge graphical improvement yet though.

With the new release, web developers will be able to embed Google Earth into their sites, insert lines and markers into the 3D environment, import 3D models (clearly a recipe for disaster), and even overlay content over different planets, stars, and galaxies by toggling Sky mode.

Google’s Earth and Maps blog writes “Our goal is to open up the entire core of Google Earth to developers in the hopes that you’ll build the next great geo-based 3D application, and change (yet again) how we view the world.”

It should be interesting to see what creative ventures emerge from the new concept. There are still a few kinks to iron out though – it currently only works for Windows users running Internet Explorer or Firefox and as Ars Technica points out, getting up close and personal with the 3D environment is not exactly the most jaw-dropping graphical experience.

If you are a developer type, you can find the Google Earth Plugin right here and start beavering away on something cool. Importing 3D models of giant phalluses attacking London would certainly not be cool. We’d appreciate a link though.