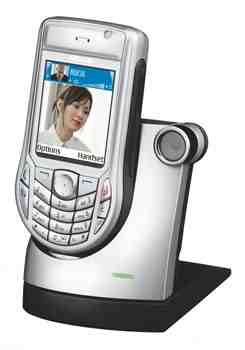 Speaking at the S60 Summit in Barcelona today, Ukko Lappalainen, the VP Category Manager for Nokia’s Nseries, claimed that users “aren’t interested” in video-calling, mainly because they find the angle a handset must be held at for the best quality video-call “isn’t very flattering”.

He went on to say that when people take photos, it’s generally from a higher angle, looking down on the person, as it makes for a better photo, and that the location of a webcam on a laptop or PC monitor is always on the top, for the same reason. Users want to look good when they video-call, which is why the function never really took off when it was introduced to the market in 2005, Lappalainen announced to the 500 or so audience members at the Summit.

After Lappalainen grasped at straws over the lack of public interest in the service, I asked Sari Ståhlberg, who is the Director of Product and Technology Marketing, about his claim. She was quick to repair any damage Lappalainen made by suggesting we’re all vain, saying the technology “hit the market too early, maybe it will still be a success”, and that at the time “there wasn’t enough support from carriers”, with the high-price of video-calls being an important factor for customers.

“The marketing push wasn’t big enough”, Ståhlberg stated, saying that most Nseries handsets have cameras located on both the front and back of the unit, and that future models will continue to have them, so she “wouldn’t count it out for the future”.