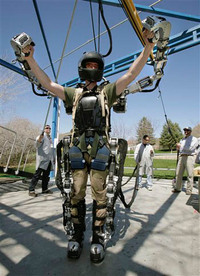 Right then, Mr Alien. Just you try and get your stinking, slimy, acid-filled fingers on poor little Newt NOW!

The robotic exoskeleton dream has just STOMPED one foot further toward reality, with the arrival of this – the Sarcos Inc. full-body robotic suit.

Sensing then almost instantaneously amplifying the movements of the wearer, Sarcos reckons this unit can strengthen the average US soldier by up to 20 times. The prototype unit exists, works, and the US Army is apparently planning on starting field tests as early as next year, when the robosuit will be put to use on boring tasks like loading cargo and lifting other miscellaneous heavy things.

As ever with all the fancy new stuff, the current drawback is battery life – the device’s power unit lasts just 30 minutes when not plugged into the mains. Futuristic war zones are going to require one hell of a lot of extension cables.