Scrabble maker Mattel has decided if you can’t beat ’em, design a Facebook application that looks better than theirs, and after failing in their attempt to give the hugely popular but unofficial Scrabulous the boot, the board game giants have launched their own version.

Never ones to sit on the sidelines, we at Shiny have decided to wade in with our opinions like English footballers in a quiet Continental cafe. As a hardcore Scrabulite and member of the successful “Save Scrabulous” Facebook group, it’s been left to me to make the call in this clash of the titans and decide which is the king of alphabetic applications. Seconds away, round one.

First up, Mattel’s offering is a whole lot prettier. There’s no two ways about it, just is. You can’t beat the green baize look for that board game feeling and the only reason we’ve grown to love the Scrabulous aesthetic is because it’s become that sneaky, fun friend that convinces us to bunk off work for a few minutes. 1-0 to Mattel.

Next, the actual interface itself is oh-so-much smoother with Scrabble®. It’s a pleasure to swap the tiles around, even if you don’t have to; like a poker player idly shuffling his chips. 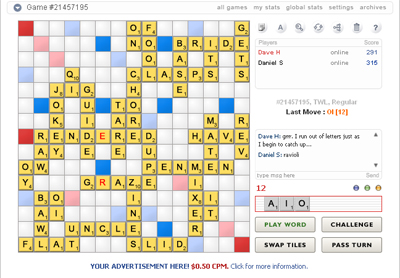 It’s a joy after the unpredictable drag ‘n drop of its rival. The tiles stay in your rack in whatever order you left them and you even get congratulatory sparkles when you the letters down on bonus squares. It does come off a little, well, gay but I’m comfortable enough with my sexuality to deal with that. 2-0 Mattel.

The gameplay of the two is more or less identical with the features we’re used to from our old friend present and correct in Scrabble. There’s the two-letter word list and the dictionary but the chat window does have to be opened to be read in the latest incarnation and when you do that, it does cover some important bits of the screen. It’s not a fatal flaw but it’s enough to forfeit this round. 2-1 – Scrabulous on the counter. 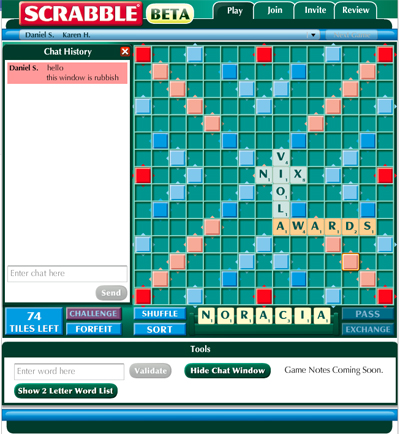 Another body blow for the people’s champion comes in the form of the 4-player game introduced by Mattel. Lots of fun this and if it is available in Scrabulous, I’ve never been able to find it.

On the downside, Scrabble® has had some major issues with game forfeiting. If someone drops out of the multiplay then all three of the remaining players are forced to quit as well, which is both rather unnecessary and potentially damaging to one’s Scrabble stats. Admittedly, Scrabble is only in beta testing at the moment but then we’ve no guarantee this is something they’re going to fix. 2-2 and all to play for.

One real pleasure Mattel has added is that you don’t have to refresh the board, it updates itself in real time and although you can set Scrabulous to refresh every two minutes, it’s unreliable and clunky. 3-2 Scrabble, oh dear.

But for all my love of Scrabulous, for all its people power, for my wonderful stats I already have, my treasured bingos and for my distaste with Mattel for the whole affair, I’ve got to admit, frankly, Scrabble® is just much better and if everyone gets over it, I’ve no doubt this latest and official version will take over as top dog, but there is a very major snag.

The absolute Achilles heel of the whole venture is that no one in North America can play it. I know! You see in Canada and the States, it’s Hasbro who owns the rights to the board game and not Mattel and they have an agreement with EA to produce all the digital Scrabble versions. So until that’s sorted out, I declare Scrabulous the winner by default. A lucky escape for the people’s champion – for now.

One thought on “Scrabble® vs Scrabulous: It's Facebook application war!”