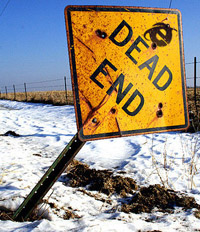 The internet is going to explode in the three seconds!

No, of course it isn’t but these are the kinds of things some newspapers would like you to believe.

The latest piece of semi-cataclysmic fear-mongery comes from the Metro and – just in case you weren’t worried enough about climate change, terrorism and immigration – they’re asking you to add to the list that the internet is doomed to grind to a halt in 2010 and it’s all YouTube’s fault. Of course it is.

The facts upon which this spurious speculation are based are that there is only a limited amount of copper wiring in the ground to take all the electronic information from internet servers to the luxury of our own homes and, as we drain more bandwidth with our increasingly broad demands of video streaming and downloading, eventually we’re going to overload it.

Well yeah, we would but we’ll just add more or come up with more efficient ways of data streaming with less infrastructure. Indeed, the Metro goes on to tell us of fibre optics that carry information 10,000 times faster than copper but just when you think they’ve taken their feet of the fear pedal, they floor it again because BT say that a national fibre optic network is 20 years away and could cost £20 billion. Shock horror!

I’ll bet it will cost less and even if it doesn’t, the Government will find the money or a cheaper way of doing it because the bottom line folks is that the internet and high-speed data transfer is just too damn important to say, “You know what, it was fun while we had it but we’ll just have to turn off the world wide web now.”

Any country, foolish enough to play that game, simply condemns themselves to economic destruction. God damn it, this kind of media nonsense really gets my goat and I tell you, these days I’ve precious few of the little bleaters left. People are so backward in looking forward.