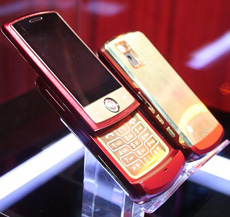 At a booth over at the CTIA show in Vegas, a Gizmodo chappy spotted the above Iron Man phone from LG.

Sadly the phone above won’t be going on sale, instead LG will be launching a site called InsideTheSuit on the 15th of April. As you can see above, it’s simply an LG Shine handset masquerading as an ultra-pricey phone with 18-carat gold, and is apparently featured in the Iron Man film which is starring Robert Downey Jnr.