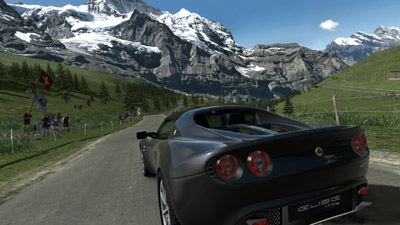 I’m not sure how to break this gently, so I’m just going to say it. Grand Turismo Mobile will not be out before the end of the year. I’m not a GT fan, myself but I know there’ll be grown men out there weeping soft, flowing tears on their office floors as we speak.

Kazunori Yamauchi, the boss of Polyphonic Digital and makers of GT, explained the difficulty of producing the long-awaited PSP version at the same time as GT5 for the PS3. An an interview with CVG, he said:

“I have to apologise because so much of our effort and energy is going into making the PS3 version that it’s making it very difficult for us to work on the PSP version.”

Now, come on. Stop your snivels because at least you can rest assured that they’re not going to rush release some semi-developed GT abortion that’ll shatter your dreams and mar what is one of the finest game dynasties of the last two decades. No, they wouldn’t do that to you.

Instead, what those clever bods are planning is to make GT Mobile as a satellite version of the PS3’s GT5. That means you can continue on your track-conquering, car-gathering, time trial-smashing highway of world auto-domination wherever and whenever you like. Worth waiting for.