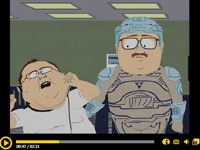 South Park creators Trey Parker and Matt Stone have asked, “How do you make money on the internet?” in their latest installment of the hit comedy show.

The episode involves the boys turning up at the YouTube offices attempting to pick up the money that, they assume, must have been earned by the world’s most viewed video clips. The only problem is that they have to wait in a line that never seems to move behind well-known internet stars such as Tron Guy, Star Wars Kid and the Sneezing Panda.

The theme comes as Viacom, the parent company of the South Park Comedy Central studios, presses on with its billion dollar law suit against YouTube for web hosting of pirate videos.

Piracy of South Park itself has become rather redundant since the launch of their website earlier this year where you can watch all of the episodes for free. Unfortunately, they still haven’t arranged UK access but I’d give a proxy server a go if I were you.

If that fails, just enjoy the YouTube classics again. Afro Ninja gets me every time.