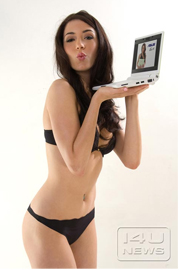 Last year, the Eee PC from ASUS launched, cementing sub-10″ ‘budget’ notebooks in the history pages forever, as other major manufacturers scrambled to keep up with their phenomenal success. Even the gadget-models at I4U News snuggled it into their boobage, as you can see!

ASUS is keeping ahead of the game, with several models already released, and more out shortly. There’s the original 7″ 4G Eee, which had a 4GB flash drive and cost £219, the French model with integrated HSDPA, a touch-screen model with boosted internal storage, and the 8.9″ Eee 900 which also has an increased memory and storage, and importantly the option of Windows XP instead of the Linux OS. Not forgetting that strange report from a few weeks ago about a desktop Eee…

There are still rumours flying around about more models, with June pointed at as a likely month for them to launch an Atom-powered machine, instead of containing a Celereon processor like before. This will give it a longer battery life, and improved performance. A 10″ model is also being planned, according to ASUS, which will hopefully be out later this year.

In the meantime, let’s take a look at the various Eee PC bandwagon-jumpers, below… 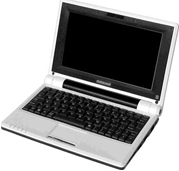 2.) Fukato Datacask – this 8-incher reportedly runs on Linux, like the original Eee, yet has 60GB of storage and just 512MB of RAM. Priced around €279, in May. How scared is ASUS?: not very scared, even ASUS can do better than 512MB of RAM these days! 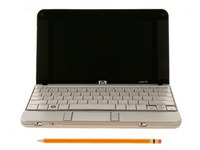 3.) HP Mini-note 2133 – this machine also has an 8.9″ screen, yet manages to cram either a 64GB SSD and Linux, or alternatively XP/Vista on a 160GB HDD. Price seems to be around $500 for the Linux model, or $600 for Windows, and it should be out later this month, supposedly. How scared is ASUS?: Extremely scared, considering it’s almost an Eee 900 copy, yet comes from mega-PC corp HP’s loins.

4.) Van Der Led’s Jisus – out of all the Eee rivals, this Jisus notebook certainly looks the closest aesthetically, but inside as well, with its 8.9″ screen, 512MB of RAM, 4GB of flash storage and Ubuntu OS. Should be launching any day, at €299. How scared is ASUS?: extremely, especially with the hardware verging on copyright infringement by the looks of things! 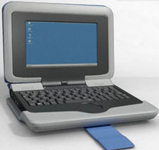 5.) Intel Classmate – looking like a dull Fisher & Price toy, the Classmate is aimed at children in developing nations. The specifications haven’t been released yet, however it’s going to retail for around $250-$350. How scared is ASUS?: only about 20% scared, considering it’s not aimed at the RSI-ridden blogger like the Eee is.