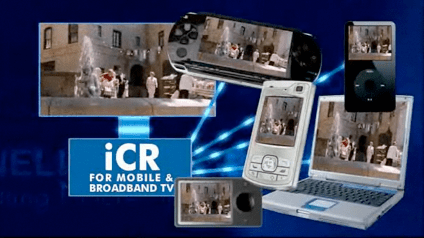 AmberFin should create a win-win situation for everyone.

This UK-based company with global operations has been established since 1973, and their skills are employed by a number of high-profile broadcasters in post-production, for converting video formats (for example NTSC to PAL, high definition to standard definition), and vision mixing services.

Interestingly, they’re also responsible for slow-motion video effects such as the bullets scene in The Matrix.

They’ve won hundreds of technical and best of show awards.

Broadcasters in transition, consumers with choice

Broadcasters around the world are continually in a state of transition from one technology to another, be that analogue to digital, standard definition to high definition, or tape to tapeless operation.

In addition, the number of different types of output format a broadcaster may wish to use is increasing: terrestrial TV, Freeview, satellite, cable, video on demand, broadband distribution/IPTV, mobile TV, and so on.

Mixed with all this is a broadcaster’s desire to both protect their content and to make money from it.

The trouble with many new video platforms, compared to traditional TV, is that it costs money to send content to each viewer. Furthermore, platforms such as mobile TV can be very difficult to create quality content for because there are so many different specifications of phone, operating system, and the like. This is much less of a problem for more controlled platforms such as Sky, Freeview, etc.

iCR is used by at least 30 high profile customers.

The National Basketball Association is an example of a non-traditional content owner. They have a fan base of around half-a-million people, and decided to digitise their 60 year video library, insert searchable meta data to make it easy to find specific content, and then sell it on to NBA’s devotees.

Finally, British Telecom is also a non-traditional customer. However, ISPs are increasingly entering the broadcast and content delivery arenas, and BT uses iCR to master video content for its broadband service. Telefonica in Spain does similar for VoD.

One strength of the AmberFin system is that a machine can now automate many tasks previously carried out by humans. This includes quality control of recorded material, DVD mastering, etc.

As mobile and Internet video continues to increase in popularity, it’s important to create high quality, efficiently encoded video so that consumers can quickly download the best video experience possible.

Secondly, the system can identify and track moving images and dynamically reframe them. This is particularly important when moving between platforms that employ different aspect ratios.

For example, most digital TV broadcasts are shot in 16:9 aspect ratio, and filming technique has changed to match that — many more panoramic shots and, particularly in sports, allowing the action to flow through the entire wide-angle frame. However, many mobile phones still use the 4:3 aspect ratio. Without this automated motion technology that intelligently reframes the picture, action would be lost or be very difficult to follow.

Another consequence of wide-angle shots, particularly at sporting events, is that of crowd shots.

AmberFin’s processes can automatically process sections of the picture in different ways. This can be used to blur less important sections (such as the crowd) while focusing on the main action.

This technology is particularly important for small screens and for saving bandwidth.

Why do I care?

This is all very interesting, but what has it to do with the consumer?

The fact is that consumers want to watch content whenever and wherever they are, in high quality, and at a reasonable cost.

Broadcasters and other content holders want to make money, without having to spend a lot on converting video into all these different formats.

As a consumer, you’ll probably never directly use AmberFin, you can be sure that a broadcaster or ISP near you is. In turn, that means you’ll get better quality, cheaper video.

For presentations about the iCR technology, check out the Demo Room on Snell & Wilcox’s web site.