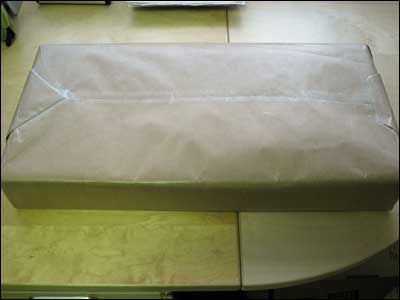 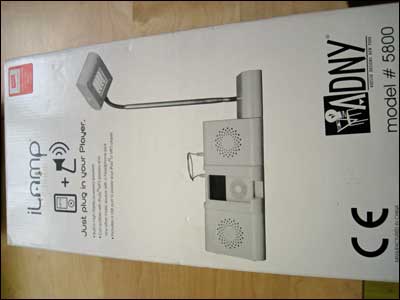 As you can see from these pictures, it couldn’t be more simpler to unpack and get working. Out of the box it’s all put together, and even comes with a snazzy cardboard iPod just in case you didn’t know what one looked like. 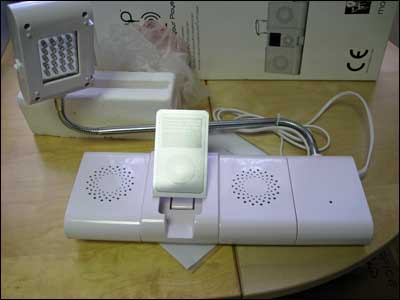 The gadget itself is made in China and says clearly on the box that it is not endorsed by Apple. And that’s probably why it doesn’t actually have a proper dock in it, just a plastic holder big enough to fit your normal iPod.

That kinda sucked when I attempted to pop my Nano into it and it fell out. Thank heavens I don’t have a Shuffle! 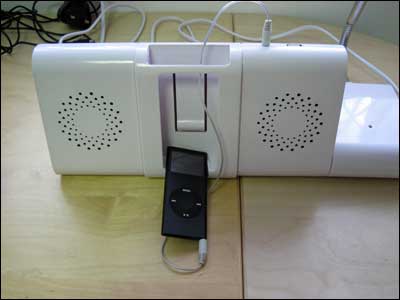 You connect up the iPod or any other MP3 using the included 3.5mm cable or via the built-in USB port. That’s a handy addition because it means you can use the speakers for your PC too.

As for the lamp, it’s pretty powerful with its little LED bulbs glowing white on the end of a bendy arm so you can angle it over your keyboard. Music-wise, it sounds fairly decent too, if a little tinny, as you can hear by watching the short video below.

It costs £49.99 which isn’t that cheap compared to some devices that really do dock your iPod and charge it. But if you fancy one you can find it on the Staples website.

What the rest of the competition don’t have though, is the sheer nerdy value of having a lamp as well! It’s a bit like shampoo with conditioner – why take two gadgets into the office, when this does the job in one!

One thought on “Tech Digest Unboxed: The Boom Box iLamp from Staples!”