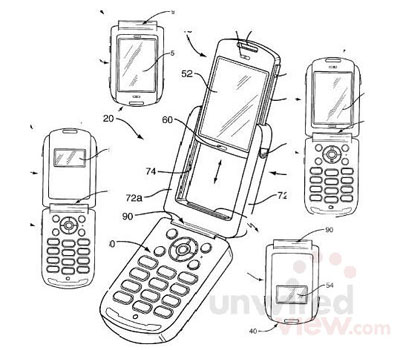 The trouble with mobile phones is, well, you can detach the screen from the keypad. I can’t count the number of times I’ve been out somewhere, and have ended up cursing that my phone’s display remains stubbornly attached to the keypad.

Oh, hang on, that’s not true. Like most mobile users, I’d rather handset makers were focusing on how to increase battery life, stop charger adapters from breaking, and in Nokia’s case, position the keys so I’m not constantly hitting the red ‘Off’ button when playing a game. Nevertheless, it’s the removable-screen challenge that Sony Ericsson has tackled in a new patent.

The title is actually ‘Detachable Housings for a Wireless Communication Device’, and the theory is that one housing holds modules like a keypad, keyboard, touchpad, camera and GPS receiver, while the other holds the screen – with the two communicating via Bluetooth when separated.

Is this The Future, or pointless innovation for innovation’s sake? We’ll have to see if the patent turns into a product before deciding.