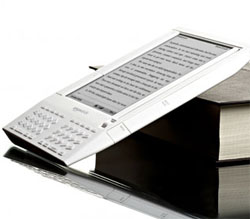 Product shortages are cool again, thanks to Nintendo’s inability to get enough DS and Wii units into the shops over Christmas. Amazon has leapt onto the bandwagon with its Kindle e-book reader, claiming yesterday that it just can’t make enough of ’em to match consumer demand.

“The Kindle, in terms of demand, is outpacing our expectations,” said Amazon boss Jeff Bezos in the company’s financial conference call.

“It is also, on the manufacturing side, causing us to scramble. We’re working very hard to increase the number of units that we can build and supply per week, so that we can get back—our goal is to get into a situation as quickly as we can where when you order a Kindle, we ship it immediately.”

The shortages aren’t good news for those of us outside the US, mind, since they raise the possibility that Kindle’s launch over here will be delayed while US demand is met. Bah.

Interestingly though, Amazon has just announced that it’s buying audiobook firm Audible for $300 million – a deal that could have a big (positive) knock-on effect for Kindle. Although it might not be so good for Apple, if Amazon decides to take Audible’s audiobooks out of the iTunes Store in favour of its own MP3 store.

Anyway, Amazon generated revenues of $5.67 billion in the fourth quarter of last year alone, and $14.84 billion for the whole of 2007. Thus, Jeff Bezos is a very rich man who can probably afford to a.) build some more Kindle factories, and b.) Stick two fingers up at iTunes.