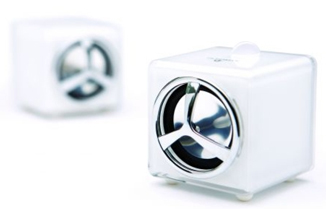 Samsung is showing their softer side with some PC speakers called ‘Ice Cube’ and ‘Snow Flake’. Awww. Look at ’em. They’re little square white things that don’t at all resemble what they’re called. Awww.

The Ice Cube PSP100 is powered by USB and has a mini-jack with 0.6 Watt RMS, retailing for €16.90. The Snow Flake PSP2300 system actually contains an amplifier and two mini-speakers, pumping out a combined 9 Watts RMS, for €39.90.