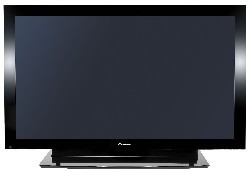 Japanese newspaper Asahi has reported a rumour that Pioneer will stop the production of 42-inch and smaller plasma panels as early as March next year, and instead buy those panels from Matsushita or Hitachi.

Pioneer’s plasma TV sales targets for this year, ending 31st March, are a mere 10 per cent of Matsushita’s (who use the Panasonic brand), at just 480,000 units compared to five million.

Pioneer will continue to manufacture its own plasma panels sized over 50 inches, while the company looks to sell the Kagoshima plant back to NEC. Pioneer already buys the panels for its LCD TVs from Sharp.

Take a look under the jump for more information, and for Pioneer’s official statement about the rumour.

Pioneer has been struggling to compete with the likes of Matsushita and LG, who have more efficient production methods, and though the news sent Pioneer’s shares up, this must be a worrying time for the company. A spokesman said that Pioneer would unveil its new flat panel TV strategy early next month.

Pioneer, however, claims that no official announcement has been made regarding the cease of production on panels smaller than 42-inches, saying instead

“On Feb. 23, 2008, the Asahi newspaper carried an article regarding Pioneer’s plasma display business.

This article was not based on a Pioneer announcement or interviews from the Asahi, but just on the basis of the journalist’s speculation.

At the 3rd quarter financial announcement of FY2008 on Jan. 31, 2008, President Sudo announced that Pioneer is reviewing our display business and preparing the mid-term business plan aiming to generate a stable revenue from the business. The review is now underway and no details have been decided as yet. We will announce the details as soon as they have been
confirmed.”

It will be interesting to see how this affects the Kuro line of plasma TVs, which the company is making a huge fuss about, if the rumour from Asahi proves accurate. Will the 42-inch model survive?