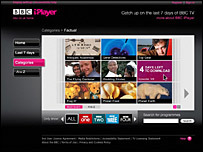 According to the BBC, over 17 million programmes were watched or downloaded on demand via the BBC’s iPlayer catch-up service in the first seven weeks of its full launch, with the BBC’s Director General Mark Thompson comparing its the arrival to that of colour TV in the 1960s.

Daily volumes have increased strongly during January and February, with over 2.2 million people watching a programme on the service in the first month of the year. The most-viewed shows included the opening game of the Six Nations rugby tournament between England and Wales and dramas including Ashes to Ashes and Life in Cold Blood.

And with both Firefox and Mac compatibility (albeit limited) in place, that should only increase in the coming months.

BBC iPlayer (via The Guardian)