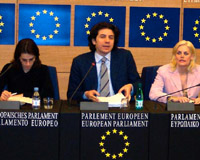 The European Union has just hit Microsoft with a ‘personal best’ fine of 899m euros – around £680m.

It’s in response to Microsoft charging “unreasonable prices” to developers for data on how to get their applications working happily on Windows. Naughty old MS was ordered by the EU in 2004 to start charging more reasonable fees for licensing out its patents, but clearly the EU thinks it hasn’t complied with that. Hence the windfall for Brussels.

This is the largest fine the EU has ever dished out for an anti-trust case, although Microsoft might actually be a bit relieved – it told US financial authorities the fine might be as large as $2.2billion back in January. In the end, it’s just over half that amount. So is no doubt worth it to keep the Windows juggernaut rolling on smoothly.

Only a company as loaded as the mighty Microsoft could consider getting fined £680m as “getting off lightly.”

Related posts
Yahoo! says “no” to Microsoft – thinks it’s worth more than $45 billion
Microsoft’s innocence: teens won’t download illegally if they know the law
As expected, Microsoft confirms the discontinuation of the HD DVD add-on