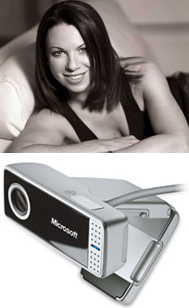 Microsoft and sex/love expert Tracey Cox have teamed up to express their worry over those indulging in a spot of internet dating whilst webcamming this Valentine’s Day – use protection, they cry!

Check what’s in view
People will make assumptions about you simply by looking at the things you own, so make sure everything in view sends the signals you want to send. If you’re keen to promote a certain image – like be seen as intelligence, for instance, make sure a pile of books are in view. If you want to be seen as artistic, put a painting directly behind you.

Be friendly
It sounds obvious but there is a temptation to play it cool for fear of appearing too keen. This can (sometimes) work in the flesh but it doesn’t translate well on a webcam. The more you smile, the more they’re going to like you. If you insist on using the ‘treat ‘em mean, keep ‘em keen’ stuff, save it for when you’re actually out on a date. We like people who like us. Simple as that.

Make them laugh
The joy of being able to see each other as you’re chatting means you can use humour, irony and innuendo without fear of it being misinterpreted – which often happens with text or email. It’s impossible to take something the wrong way if you can see it’s delivered with a big, cheeky grin!

Use the camera to reveal the different sides of you
Obviously, you’ll want to look your best the first time you chat via the webcam, but don’t be afraid to let them see you looking less than perfect. Revealing different ‘looks’ gives you dimension.

Look animated and expressive
Give good face! Popular people tend to have animated faces and make a steady stream of expressions when they’re talking or listening. Not only do facial expressions liven up our own stories, they also let other people know the effect theirs are having on us. A lot of expressions are infectious – it really is a case of smile and the world smiles with you!

Watch your body language
Don’t slouch – you’ll look lazy and uninterested – and if you’re nervous, watch what you’re doing with your hands. Also be careful about camera angles. Try out your webcam with a trusted friend first, getting them to check it’s in a flattering position. Practise tilting your chin down and lifting it up, getting them to tell you which is most becoming.

Don’t cross your arms
Before you jump in with a (defensive) ‘It’s comfortable, that’s all’, let me agree with you. But while some people do in fact cross their arms for comfort, just about all of us adopt this position when we feel defensive, protective, angry, threatened or plain scared. It sends negative signals, so don’t chance it. While we’re on the subject, if you’re female and body conscious, resist the urge to hug a pillow. It’ll make you look both childish and insecure.

Write down a few ideas of what to talk about before you chat
Funny things which have happened that day, something interesting you heard on the news…If you get suddenly tongue-tied, a quick glance at the list saves you from awkward silences. Keep conversations reasonably light-hearted at the start – it’s fine to go deeper later but ideally you’d save serious topics for when you meet up.

Compliment but not too much
When someone tells us we’re sexy, funny, bright – whatever – it has the optimum effect the first time it’s said. Keep harping on it and you not only dilute the compliment, you also get the opposite reaction to the one intended: instead of liking you, they find you annoying!

Does he fancy you?
Watch to see if he’s smoothing or messing up his hair. Guys do this involuntarily if they’re keen, trying to look their best. Also check out how he’s sitting. If he’s keen, he’ll tend to sit with his legs open, giving you a ‘crotch display’. It’s a subliminal ‘Me Tarzan, you Jane’ gesture, highlighting he’s got something you don’t…

Does she fancy you?
Women also tend to play with their hair or smooth their clothes, in an effort to look their best. If she tilts her head to the side, it’s a sign she’s interested in what you’re saying. It’s also good news if she massages her neck or her hands start to glide over her arms and neck. This is called ‘autoerotic touching’: she’s touching herself where she thinks you’d love to!

Use ‘we’ as soon as you possibly can
‘We’re great at this aren’t we!’, or ‘We’ll have to get used to chatting this way’. Linking the two of you conversationally subliminally plants the idea of linking up in other ways. Another great word to use often: ‘you’. Instead of ‘Anyway, I was talking about,’ say ‘Anyway, as I was telling you’. Including ‘you’ makes people feel you’re talking to them specifically and it pushes the pride button. The word to use least of all is ‘I’. You’ll sound selfish if every sentence starts with it.